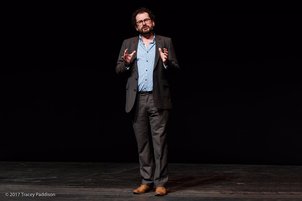 I'm the world's first (and so far only) Professor of Boney M Studies (University of Babylon). In this sample lecture I demonstrate how Boney M paid attention at school and used real-life examples from history to excellent musicological effect, until the car crash moment involving gangster Ma Baker - the meanest cat in old Chicago town, she really knew how to mow them down. 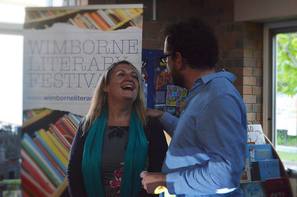 I'm also the World's First ABBA Life Coach (University of Waterloo) in which I use the Power of the 70s to help YOU change YOUR life. Financially challenged? I can help you with your money money money problems. Unlucky in love? I can get disinterested strangers to take a chance on you. For a sample consultation see the video.

Filmed at the Wimborne Literary Festival 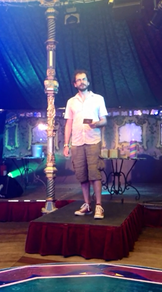 My Wordplay Cabaret is a smorgasbord (not as rude as it sounds) of robot train inspectors, odes to John Cooper Clarke, and a man who interrupts poetry events because he thinks they're Bible readings. Some people can have a bit of a nervous breakdown when they hear the word poetry, can't they, but don't worry, this has rude words and reluctant audience participation to make it more palatable. 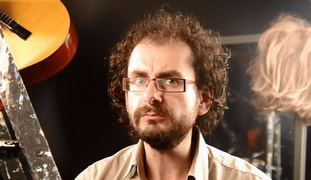 Photo (c) Dave Daggers
More ABBA, in which we meet Sven - legendary fifth member of the band, sacked because they didn't want to
be called SABBA. Sven is now a happy
man with his own herring farm and
the latest Volvo, but he is still bitter
about how he was abandoned many
years ago and left to fend for himself,
with only his Ikea logburner and
memories of his mother's Ryvita factory
to keep him company. A notorious hellraiser in the 70s, the 'Mashed Swede' as he was known Sven Olbeyus now reflects on his life beyond the spotlight.