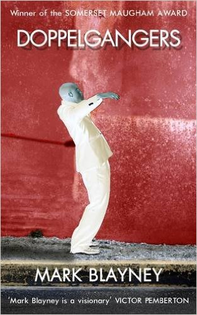 Ghosts torment from the past... future selves write back... the lost look about, find themselves watched, are led astray.

Keep company with thieves and murdering artists; with the couple who miss the ferry for their make-or-break holiday; the mayonnaise deliveryman who becomes a reluctant golddigger, and the psychoanalyst and his GP wife who investigate a local widow's naked appearances in church.

For a signed, numbered, limited edition for £10.49 (£8.99 plus £1.50 postage and packing in UK), click the button above. You can specify what message you would like inside the book when you buy.

Outside the UK, please contact me directly for a postage rate in the box at the bottom of the page.


'Full of surprises, it is a fine collection'
D M THOMAS

'The stories intrigue, amuse, surprise and unsettle all at once with a confidence and verve that make this collection a cracking good read'  LINDSAY CLARKE

'As good as some of the best of Elizabeth Bowen's, and praise does not go higher than that' JOHN BAYLEY

Extract from The Murder of Dylan Thomas, one of the stories in the collection


DYLAN, ACCORDING TO the long-suffering Caitlin, went out every night of their marriage. Why did she stay with him? He earned no money, he womanised, he drank.


We don’t forgive him the women, although as I saw him heading towards me, brow lowered, fat cigarette shoved in his mouth like a spoon, I could understand it. Were I a lover, I would love him. Were I a wife, I would stay. He paused then continued towards me, curly hair high on a balding head, yellowy fingers. Crossing the forecourt was the same man, older, fatter, face bloated.

On a stone, the same man scribbling in a notebook. By the entrance he argued with a woman. I watched all these versions of Dylan and tried to think of the killer question. First law of, always be ready with a question.

One in a bow tie said, never believe that you cannot change the past.

Another read a poem that I rather liked, but as he turned and read it differently, it sounded terrible.

The older one, although he cannot have been as old as he seemed, looked me up and down and said, be quick. Be quick.

Am I really 91 and remembering this, or is it actually the next morning and I am in a hospital bed, dreaming that I am old, because I am disorientated?

I looked across the stone walls and saw Robert in the garden, naked. He held a sheaf of papers and recited from them.

Dylan liked to sit with his arm on her neck, he said, his finger hooked in her bra. He dropped the page and read from another one. Bed me now, she said, come, bed me now, now. Slim-hipped, he said, pink jeans like rosehips. I watched, waited for more. She laps it up, she licks words like swallows. As he spoke birds swooped past.

He turned and walked towards the house, and did not see me.

At the Boathouse I admired the vastness of the view and smallness of the rooms. There was an outside café, its terrace cleared of chairs and parasols because the flood had only just gone down.

It even floods here, an elderly lady asked as she picked over the crumbled cliff of her scones. Yes, replied the owner, also elderly. Two more elderly ladies sat at the tables, studying the sea. One more behind me, nodding slowly. It was amok with elderly ladies. I was in an elderlylady of elderly ladies.

I opened my book on Dylan and the old spine cracked.

Nothing in that is true. A bony, blue finger jabbed the pages.

Really? How do you know? First law of.

Because I knew him. She settled opposite me and winced at the hard wood.

Elderly ladies have pale blue eyes, and they bore at you, waiting to peck you like a worm. When do old ladies become old? There is no age you can fix it at. (I know now, but I was thinking this then.)

He wasn’t the boozer everyone claims he was, she says, her voice surprisingly soft after you’ve had the eyes at you. He couldn’t afford booze, he never had any money.

I must have looked questioning because she continued. It wasn’t that he was drunk, it was that he couldn’t take his drink. She sat back. Quite a different problem, of course. So he appeared heavily drunk when he’d only had a few.

People still said 'of course' in those days, like the previous generation said 'you see', and to us it sounds imperious and to them it was normal. A vast pot of tea appeared. I wondered if it was somehow for both of us, but there was one cup, one saucer.

He liked living here because he could have a couple of drinks quietly in the pub – did you go to Browns? – I nodded – and watch the people going by, and write.

She pursed her lips and rattled the teapot. Old ladies like their tea strong.

I knew his wife too. They were kind, gentle people. It’s all been exaggerated. Even the video they have on upstairs – she nodded to the house – has that line about the whiskies, the eighteen whiskies. It isn’t real.

I thought he … everyone says … well known that…

She sipped her tea between each part of the list.

He spoke fiction. Everything he said was made up.

I nodded. Be patient, let her talk.

Look at the letters, you soon see that. He spins yarns, he boasts, he invents personalities.

So … why did he die so young, if he wasn’t drinking that much?

One of her clones took the tray away. Would you like cake too she asked. I shook my head. There was a ringing sensation that buzzed around my ears.

When he was in the States, he was ill. He was always ill. Pleurisy, asthma, bronchitis, you name it.

Dylan sits on the wall, swinging his little legs. I was a sickly child, he says, as he puffs on the stub of a cigarette.

The elderly lady examined the remains of her cake. A doctor there thought he was drunk. Sedated him. Gave him cortisone, and morphine. Together! She sat back.

Dylan stands beside me, looking out to the estuary. He turns and glowers at me. And, he says, forehead a granite mountain, benzedrine. Benzedrine!

The old woman leant forward. Can you believe it?

I suppose… that’s what they did in those days.

By the end table, Dylan shakes his head and points at me. I follow him and we go through the low-beamed door, Dylan waddling ahead, me ducking to fit inside. Past the corridor is a white-walled room, pipes running at shoulder height, ancient electricity sockets like boles on branches. Dylan lies in a rickety bed, motionless, and as I stare at him a woman breaks away from two white-coated juniors, their horn-rimmed glasses jiggling comically on their heads. She rushes over to Dylan and glares at him.

Is the bloody man dead yet she says, before she is bundled away again – or doesn’t say, because I’m not quite sure I heard her right. The more I think about it, the less sure I am that it’s what she said, but I can’t remember now to report differently. It’s all chaos and movement – photographers are there now, leaning in over the railed balcony, the flashlights illuminating Dylan’s face and making him alive, his lips and eyebrows twitching in the changing beams of light.

We’ve done all we can, explains the doctor, his voice gravelly and American. As much as we possibly could.

He is a special patient, you can see the doctor thinking; we have taken far more care over him than we normally would. We thought of everything we could and we gave it to him, because the eyes of the world’s press are on us; what would it say if we were accused of neglecting him?


Official book launch November 24th, Chapter. I am available for readings and performances - contact me in the box below for more information.